We believe the Bible to be the holy, inspired Word of God and that, “All Scripture is given by inspiration of God, and is profitable for doctrine, for reproof, for correction, for instruction in righteousness: that the man of God (all believers) may be perfect, thoroughly furnished unto all good works” – 2 Tim. 3:16,17.

We believe that there is one God manifested in three Persons. “For there are three that bare record in heaven, the Father, the Word, and the Holy Ghost: and these three are one” – 1 Jn. 5:7.

Because Jesus is fully God, we believe according to Scripture, “that without controversy…God was manifest in the flesh, justified in the Spirit, seen of angels, preached unto the Gentiles, believed on in the world, received up into glory.” (1 Tim. 3:16)

We believe that Christ was fully man, and that “Jesus Christ of the seed of David was raised from the dead according to my gospel.” (2 Tim. 2:8)

We believe that Jesus Christ is the One and only “mediator between God and men” – 1 Tim. 2:5, and that He is the only means of salvation, “Neither is there salvation in any other: for there is none other name under heaven given among men, whereby we must be saved.” (Acts 4:12)

We believe the Holy Spirit to be fully God, equally divine with the Father and the Son.

We believe that the Scripture clearly states that a person is indwelt with the Holy Spirit once they are saved: “In Whom ye also trusted, after that ye heard the Word of truth, the gospel of your salvation: in whom also after that ye believed, ye were sealed with that Holy Spirit of promise.” (Eph. 1:13)

We believe that man’s purpose was to glorify God and enjoy fellowship with Him forever, but mankind chose to disobey resulting in sin and thereby bringing about the ultimate consequence of death, involving eternal separation from God, “Wherefore, as by one man sin entered into the world, and death by sin; and so death passed upon all men, for that all have sinned.” (Rom. 5:12)

We believe that mankind, because of his fallen and lost condition, is totally incapable of saving himself and that his only hope is through the grace of God, offered through faith in His Son Jesus Christ, “For by grace are ye saved through faith; and that not of yourselves: it is the gift of God: Not of works, lest any man should boast.” (Eph. 2:8-9)

We believe that salvation is a free gift and is eternal and that, “the gift of God is eternal life through Jesus Christ our Lord.” (Rom. 6:23) We believe that once a person is saved, Jesus promises, “I give unto them eternal life; and they shall never perish, neither shall any man pluck them out of my hand,” (Jn. 10:28) and that we are eternally secure in the Father’s hand, “No man is able to pluck them out of my Father’s hand.” (Jn. 10:29)

We believe the Church is the “called out ones of God,” made up of all those who call upon the name of the Lord for salvation.

We believe according to Scripture, that the church is “the pillar and ground of the truth.” (1 Tim. 3:15)

We believe that according to Jesus’ promise, He will build His church and the gates of hell shall not prevail against it. (Matt. 16:18)

We believe that the church, though presently imperfect, has been promised by God, that it will be presented to Himself “a glorious Church not having spot, or wrinkle, or any such thing; but that it should be holy and without blemish.” (Eph. 5:27)

The Return of Christ

We believe in the immenent, personal coming of Christ for His Bride, that “in a moment, in the twinkling of an eye, at the last trump,” (1 Cor. 15:52) “That the Lord Himself shall descend from heaven with a shout, with the voice of the archangel, and with the trump of God: and the dead in Christ shall rise first: Then we which are alive and remain shall be caught up together with them in the clouds, to meet the Lord in the air: and so shall we ever be with the Lord.” (1 Thess. 4:16-17)

We believe in His subsequent premillenial return to the earth to set up His kingdom, “that the kingdoms of this world will become the kingdoms of our Lord and of His Christ; and He shall reign forever and ever.” (Rev. 11:15)

We believe that mankind was created as an eternal being as a living soul with an eternal spirit and a physical body.

We believe that at death the spirit and soul of each person who has trusted in Christ for salvation passes immediately into His presence, “to be absent from the body and to be present with the Lord,” (2 Cor. 5:8) and there remains in conscious bliss until the resurrection of the body at Christ’s coming; whereupon, soul and new body will be reunited to enjoy the glories and blessings of heaven forever. (2 Cor. 15:42-44; 51-54)

We believe also that the souls of those who have rejected Jesus Christ as Savior remain after death, in conscious misery until the final judgment of the Great White Throne when the soul and body reunited, will be cast into the lake of fire for everlasting punishment.

We believe the Lord Jesus left for the obedience of His people two ordinances, memorial in character, which are to be observed:

1. Baptism – We believe that baptism (water immersion) is an outward picture of the inward work of being spiritually dead, buried, and raised with Christ, “Therefore we are buried with Him by baptism into death: that like as Christ was raised up from the dead by the glory of the Father, even so we also should walk in newness of life.” (Rom. 6:4) When a believer follows the Lord in baptism, they are commemorating what God accomplished for them, and they are publically identifying with Christ, testifying to the world that they have chosen to follow Him. (Matt. 28:19-20)

2. The Lord’s Supper – We believe the Lord’s Supper was given to us by Jesus Christ for the purpose of remembering Him “This do ye as oft as ye drink it, in rememberance of Me,” (1 Cor. 11:25) and what He accomplished for us at Calvary. We believe it reveals to us the high price He paid to purchase us from our sins with His very own blood. (Rev. 1:5) We believe it was given exclusively to the believer and should never be taken in an unworthy manner. (1 Cor. 11:27) We believe that when we “eat this bread, and drink this cup, ye do show the Lord’s death till He come.” (1 Cor. 11:26)

Are You a Good Person? 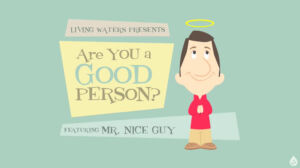